My husband and I decided to start trying for our second child in January of 2007.  Although we had never had problems getting pregnant before, 2 previous pregnancies on the first try – the first one ending in miscarriage…  this time proved to be a challenge – not because of fertility issues, but due to having a 2.5 year old son, finding time to “try” wasn’t always easy…

But, by March, we were pregnant!  I had my first ultrasound at around 9 weeks – and the night before my u/s, I had a dream that I had boy/girl twins.  At my appointment, while waiting to go in, I told my mother (my husband had to work, and since this was just the first, dating u/s, I told him it was no big deal…) about my dream.  She laughed and said, there is NO way it’s twins.   So, in we go for the ultrasound, and the tech was very quiet, then she asks if we used fertility drugs, which of course made me a bit nervous.  I said no, and then she told me we were having twins!  OMG, such mixed feelings!  Excited, but yet feeling guilty for my then 2.5 year old, since instead of having a sibling playmate, they would have each other, thus leaving my son out!  Everything looked relatively good – they were a little concerned since they couldn’t see a dividing membrane, but they said that it was SO early, that it wasn’t an issue at that point.

I was lucky enough to go to a high risk ob/gyn practice that knew when they were out of their league, so I was referred to the local hospital’s (which also has a level 4 NICU and is a HUGE, innovative hospital) perinatal unit for further monitoring.  At my 12 week nuchal fold ultrasound, I was told everything looked “good”, they could see the dividing membrane, BUT, although both babies were within the normal measurements for nuchal fold, one twins measurements were larger than the other, which could be the very early sign for TTTS, or it could be nothing.  I was scheduled to come back weekly for scans to monitor…

Every week, the growth difference between my twins got larger and larger until at my 16 week u/s on a Friday in August, we were told that 1) they were girls, and 2) we needed to go to Florida to have surgery with Dr. Quintero (we live in NJ…).  We were also advised to name our girls, so we wouldn’t have to do it over “bad” circumstances.

That weekend was a whirlwind of making plans and travel arrangements. My husband would stay home with my son, and my mother would go with me to Florida.  Tuesday morning we had a last u/s at the hospital to make sure we were still candidates to go to FL, had my grandmother’s funeral in the morning and flew to Florida in the afternoon.  Of course, just to add to my anxiety, our flight was delayed by 6 hours, we didn’t take off until 11pm, didn’t get to our hotel until 4am.  We had a few hours of sleep before heading to the hospital for our day of testing.

The testing was nerve wracking and long.  Our Baby B – Julia, our donor, was less than half the size of Baby A – Samantha, our recipient.  Julia was totally shrink wrapped and in really bad shape.  One of Dr. Q’s assistants really tried to talk me into terminating Julia to save Samantha.  I could not do it – I needed to give both of my girls the same chance!  At last, we were told that we were scheduled for surgery the next morning.

Surgery was terrifying and amazing.  I got to SEE both my baby girls – it was an experience I wish I never had to undergo, but looking back, I am so glad I got the opportunity.  Now came the LONG 24 hour wait to see if it was successful…

SUCCESS!!  Both the girls looked great, our donor Julia already had more fluid and was moving around.  Dr. Q said it was a success and congratulated me on my 2 girls.  I was discharged from the hospital, to spend another night at the hotel before flying home.

At home, I was on bed rest, with weekly appointments at both my ob and hospital perinatal unit for ultrasounds.  Everything looked great.  18 weeks, 19 weeks, and then I was told to take a week off of u/s and come back at 21 weeks.  I knew something was wrong during that ultrasound.  The tech was too quiet – usually we chatted all during the ultrasound, but that day she was silent.  My mother was with me again for that appointment, and after the tech left to get the doctor, I told her that something was wrong – she didn’t believe me…  The perinatologist came in, and told me that we had lost our donor, Julia.  Due to an overly optimistic perinatologist (not the same one that I saw that day…), he did not feel the need to tell us that Julia only had 10% placental share, and was showing signs of IUGR.  I was SO hurt, angry and of course devastated!   But of course, I knew I had to keep going for Samantha – our shining star at this point.

Other than weekly ultrasounds and ob visits, now my pregnancy felt almost “normal”, Samantha was doing great, no problems, no worries…

Saturday of Thanksgiving weekend, my son just getting over a stomach virus, my husband, son and I took a nap.  I napped on the couch.  I rolled over, and all of a sudden I felt and heard a pop.  I was 30 weeks 4 days pregnant.  Of course I had NO idea what it was, until I stood up and was flooded.  Called the doctor and off to the hospital I went.

Because I was over 30 weeks, they would not give me anything to stop labor should it progress, but they did give me the steroid shots and started me on a course of antibiotics.  Sunday passed slowly, but I at least had the reassurance of feeling my Sam moving (and without the extra padding of all the amniotic fluid!).  Monday morning I went into full blown labor.  The NICU team came in to see me, explaining what they would do, where she would go, and what I could expect.  They really reassured me and made me feel that she would be fine, especially since they had dealt with preemies MUCH younger than mine.

Had my c-section, she was born screaming, at 11:25am, 3lbs 1 oz and 15 ¾ inches.  Such a relief!  I got a quick glimpse of her in the isollete on her way to the NICU with my husband, while I got stitched up.

The next few days are a blur, as I dealt with a high fever and infection…  First, within hours of her birth, I was told that she was having a problem expelling the carbon dioxide – so she needed a ventilator.  Then they wanted to place an umbilical line, but the vessels in her umbilical cord were too narrow.  They tried her wrist too – with no luck.  Honestly, I don’t even know where they ended up putting it, I was such a mess!

That first night, at around 3am, I was called down to the NICU, even though I had a fever… I knew it couldn’t be good.  Luckily, by the time I got down there, she had stabilized, and I visited with her for a little while – first time I really saw her and got to touch her.  She was so unstable though, movement and touch was too much stimulation, so we had to really limit that.

The next few days were a blur of different antibiotics, 3 different types of ventilators, some hope and a lot of meetings with doctors.  I was released from the hospital on Saturday, we visited with Samantha on Sunday, during which she had a GREAT day, and doctors were a little more optimistic.  We went home feeling great. 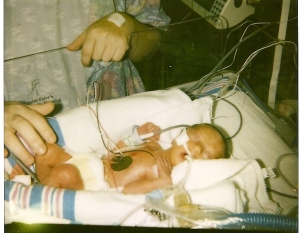 2:00am, Sunday night/Monday morning – we got the phone call that no parent with a child in the NICU wants to get.  We needed to get to the hospital ASAP.  We got dressed, dropped our son off at a family member’s house, and started the 20 minute drive to the hospital.  We got into the NICU to see everyone clustered around my baby, doing chest compressions and administering drugs directly into her chest.  She was dying.  They asked me what they should do.  How does a mother answer that question?!?!?!  I knew she was not going to make it, so I told them to stop.  They quickly unhooked her from everything, brought over a rocking chair and a screen, and finally got to hold my baby for the first and last time.

Once she was gone, the doctor and nurses took her away to clean her up – then she was brought to us in a private room.  We spent 2 hours with her.  My biggest regret is not taking some pictures with her, as I have none of us holding her.

We had both of our girls cremated together, and had a memorial service a week later.  It has been over 5 years since I lost my twins, seems like forever ago, but yet yesterday, and I miss them and what should have been every single day.